Sale on canvas prints! Use code ABCXYZ at checkout for a special discount!

Arabian Horse Jewel of the Desert

Previous Next View All 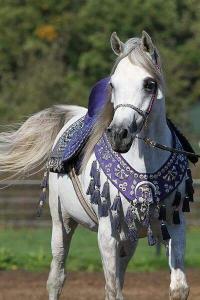 I have always been intrigued by this breed. One of the oldest and most recognizable horse breeds in the world. The purebred Arabian horse feature characteristics are its finely chiseled head, dished face, long arching neck, large nostrils, and high tail carriage. The horse's entire appearance exudes energy, intelligence, courage, and nobility. Arabian horses have a famous "floating trot". The Arabian horse originated among the desert tribes of the Arabian Peninsula, bred by the Bedouins for its endurance and prowess as a war mount.

Living in the desert the breed developed adaptations such as thin-skin, tails held high when in motion, both traits that help cool the body. Arabian horses have strong hooves that helped them withstand the sand and rocks of the desert. Arabians may appear delicate in appearance, but they are actually strong, with dense bones and short backs. Their extraordinary stamina is perhaps the most important physical characteristic of the breed. Their well-sprung ribs, large flexible nostrils, and unique attachment of the neck to the head all allow for tremendous lung capacity. Because of these valuable adaptations, the Arabian horse can travel long distances at high speed.

The Arabian horse is highly valued and to own one is of great status and wealth. The breed is also known for its intelligence, courage, loyalty and spirited yet gentle disposition. The Arabian breed has an amazing affinity for humans. For centuries the Bedouin treated their horses as members of the family. The foals were raised with their children, the mares sought shelter in their tents. They were highly prized and required constant guard against being stolen. Over time this became a genetic characteristic of the breed and one of its most endearing traits. Arabian horses bond strongly with their humans and have a strong desire to please. They actively seek affection and return it in kind.

Upon further exploration of the breed, I did some research, because of my curiosity, as to why the native peoples "decorate" their horse tack, use of drapes, tassels, and fancy saddles. If you are a horse person you will appreciate the whys. Well, what I found out is that it is theorized that the heavy tassels attached to the bridle exerted pressure on the reins and the horse's poll (the area of the neck behind the ears where the headstall rested). This pressure would encourage the horse to lower its head and flex the neck. This could be particularly valuable when shooting arrows from the horse's back, as was common. It also freed the rider's hands for handling weapons such as the bow, sword, and lance. The continued pressure on the reins would maintain a level of control over the horse's speed and direction while the reins were dropped.

The tassel or collar is actually attached to the reins. Two later examples allude to the tasseled collar's use. A 19th century print of a mounted Mamluk shows a cloth rein attached to the headstall of his horse's bridle, which passes down through a ring at the end of the collar and is tied off to the front of the saddle. In this instance, it could be functioning as a martingale of the "tie-down" type which prevents the horse from an exaggerated elevation of the head.

Whatever its original intended purpose, with time the tasseled neck strap or collar seems to have taken on a more decorative use. As some later examples show, the collar was fitted with longer and more elaborate tassels, some made of horsehair or animal tails such as those from leopards. Other later versions the collar itself became more ornamented, often embossed with gold and other precious metals. One example is covered entirely in gold encrusted with precious gems.